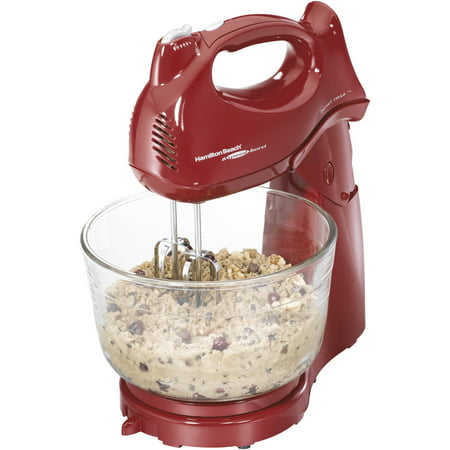 Grab this 4 QT stand mixer for ONLY $14.96 on walmart.com This stand mixer is available in red or black.
FREE SHIPPING on $35+ orders or select free store pickup if available.

CHECK IT OUT HERE

Create your favorite recipes using the Hamilton Beach Power Deluxe 4-Quart Stand Mixer. It gives you all the blending action you've always wanted in one sturdy casing. This 4-quart stand mixer offers six speeds, performing operations such as gently turning a delicate batter to thoroughly mashing your potatoes. It boasts a two-way planetary combining action for thorough, hands-free mixing of ingredients. This clever design allows the mixing head to rotate around its own axis while it also rotates around the bowl allowing for complete interior surface coverage. This guarantees that your ingredients blend flawlessly together. The Hamilton Beach Power Deluxe 4-Quart Stand Mixer has a powerful 275W motor and a tilt-up head that lifts out of the way giving you easy access to the contents. It comes with a glass bowl, beater, whisk and a dough hook.

Power Deluxe 6 Speed Stand Mixer This feature-packed mixer can be used as a stand mixer or a hand mixer for maximum versatility in the kitchen, and lets you determine the best tool for the job. Kneading a batch of sticky dough? Let the stand mixer do the work. Remove the hand mixer from the base to achieve the fast results you want. Tackle any mixing job easily with the five attachments including a whisk, traditional beaters, and dough hooks. The mixer handle is designed for control and comfort, and the unique Bowl Rest feature allows the hand mixer to sit on the edge of the bowl. Choose from six speeds, and use the special QuickBurst button for a quick boost of power at any speed. The Shift & Stir Bowl allows you to position the beaters near the edge of the bowl or in the center. Five attachments included - beaters, whisk and dough hooks Doubles as a hand mixer Shift & Stir bowl 275 Watts peak power QuickBurst button Four quart glass bowl Bowl Rest mixer stabilizer.

This 4-quart mixer unlocks from the stand, doubling as a convenient hand-held. It is available in several fashionable colors sure to complement your decor.
Hamilton Beach Power Deluxe 4-Quart Stand Mixer: 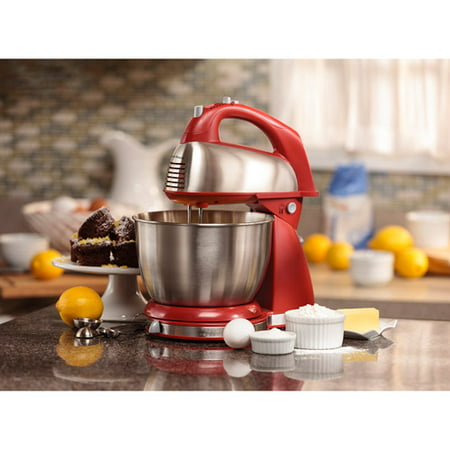 Looking for a different style? Check out this one.

This Hamilton Beach Classic Stand Mixer lets you determine the best tool for the job. Kneading a batch of sticky dough? Let the stand mixer do the work. Blending a quick dressing? Remove the hand mixer from the base to achieve the fast results you want. That sort of versatility is what an interchangeable hand/stand mixer can offer your kitchen. The Hamilton Beach Classic Chrome Hand/Stand Mixer includes a variety of attachments, including traditional beaters, a whisk, and dough hooks. Its six speeds and QuickBurst button allow you to tailor mixing and beating to achieve your desired result. This versatile kitchen countertop appliance features a four-quart stainless-steel bowl, a Bowl Rest mixer stabilizer, and 290 watts at peak power. With the traditional beaters, whisk and dough hooks that come with your Hamilton Beach Classic Stand Mixer, you'll be pushing culinary boundaries with ease!